Tortoise Through the Eyes of a Biologist: What Can Wild Tortoises Tell Us About Our Pets? Part I: Evolutionary History

Tortoises are personal pets that have gained immense popularity around the world in recent years. And as evidenced by the proliferation of books and websites catering to the subject of captive tortoise maintenance, keepers of tortoises are constantly seeking information about providing their pets with optimal conditions. Many species adapt well to captivity, but pet tortoises are very much wild animals. Knowledge about their wild counterparts, therefore, may help tortoise keepers go a long way in satisfying the needs of their pet tortoises. The purpose of this series of posts is to discuss aspects of the biology of wild tortoises – including evolutionary history, life history traits, physiological ecology, and social behaviors and communication – that can help keepers of tortoises provide a better existence for both captive and wild tortoises. In my first post, I discuss the evolutionary history of tortoises. 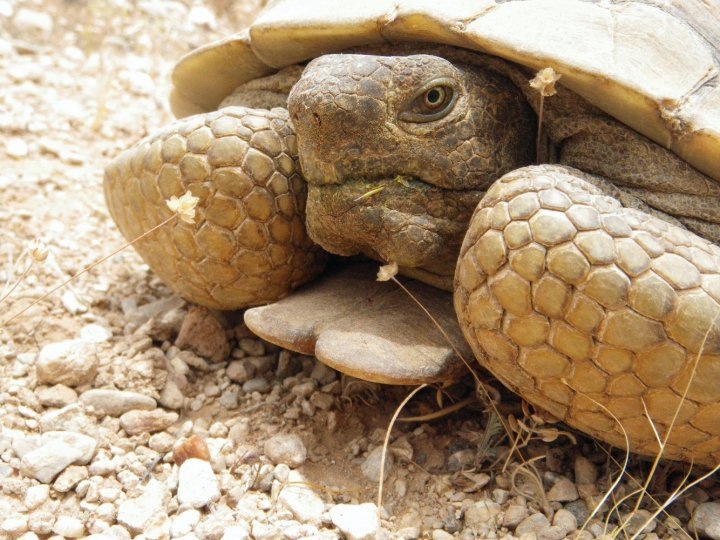 Tortoises are in the family Testudinidae, one of 14 turtle families, and represent the only turtle family that is completely terrestrial. They exhibit a number of morphological and physiological adaptations that have allowed them spread to almost every continent on the planet and evolve to persist in a wide variety of terrestrial habitats and ecological conditions. These adaptations include heavily scaled limbs and heads that provide protection against predation and water loss; strong, elephantine limbs to support their bodies during terrestrial locomotion; stout, un-webbed toes adapted for walking and digging; and a specialized urinary bladder that allows them to store water for metabolic processes.

The Testudinids are most closely related to Geoemydids, a family of mostly aquatic and semi-aquatic turtles that are primarily distributed in Asia. Tortoises probably evolved in Asia during the Paleocene Epoch (66-56 million years ago) following the mass extinction that characterized the terminal Cretaceous Period. The absence of more than three-quarters of life on the planet, including all of the non-avian dinosaurs, created ecological opportunities on Earth’s renewed landscapes for the evolution and spread of new species, including tortoises. The earliest described tortoise is Hadrianus, a species that originated in Asia about 50 million years ago during the Eocene epoch. Hadrianus, which is very closely related to the extant Manouria, was a very successful, widespread species with fossils known from Asia (Crumly 1983; Danilov and Averianov 1997), North America (Auffenberg 1974), northern Africa (Andrews 1906), and Europe (de Broin 1977; Mlynarski 1955; Schleich 1981). 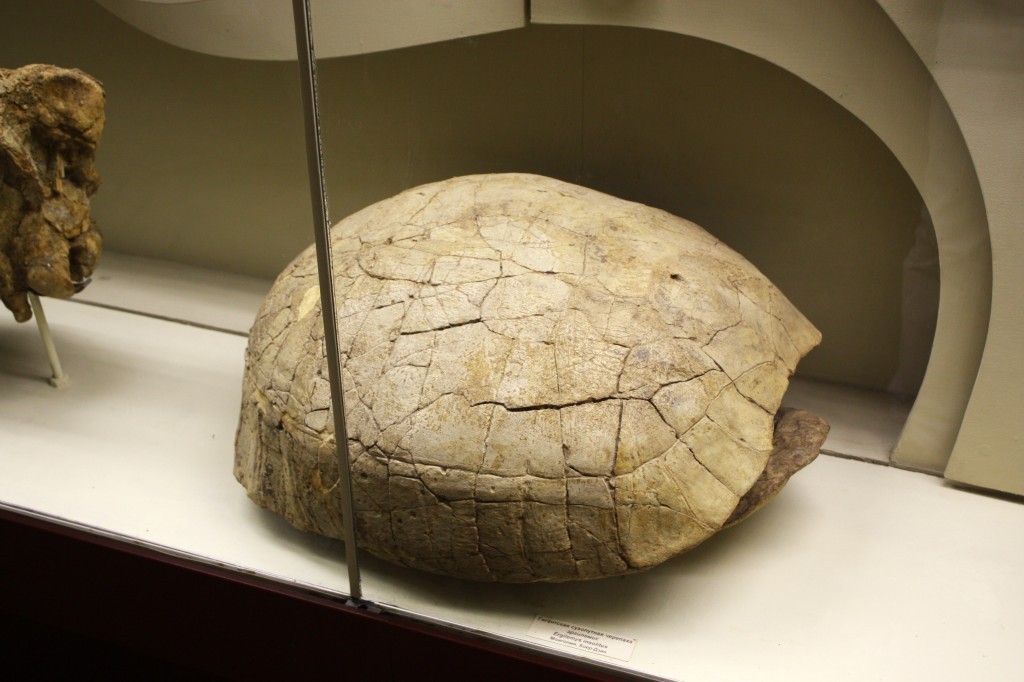 The descendants of Hadrianus diversified during the Miocene Epoch and climaxed in numbers of species during the Pleistocene. Today’s tortoises include at least 52 recognized species and 25 subspecies distributed among 16 genera (van Dijk et al. 2014). Their success is measured by their occurrence on nearly every continent; in fact, they exhibit the widest geographic distribution of non-marine turtle families. However, modern tortoises represent just a fraction of their Pleistocene relatives. The evolution and spread of humans across the planet spelled the first (and likely the last) major threat to tortoises. Tortoises provided an easily-harvested, high-nutrient source of food for humans, and many tortoise species did not survive in the face of this new threat. Several species of giant tortoises became extinct by the Pleistocene/Holocene transition, including the central Asian Megalochelys, which was the size of a Volkswagen Beetle, and five North American species of Hersperotestudo, relatives of the modern Gopherus tortoises. More recently, the actions of humans caused the extinction of numerous, giant, island-dwelling tortoises, including several species of Aldabrachelys, all of the giraffe-necked giant tortoises (Cylindrapsis sp.), and several species of Galapagos giant tortoises (Chelonoidis sp.).

There are three major threats to wild tortoise populations. First and foremost is habitat destruction, one of the most influential agents of human-induced global change. As habitat is erased or degraded, tortoise populations are squeezed into smaller and more isolated patches of habitat, hastening their demise. Human consumption of tortoises, a phenomenon that began in the Pleistocene and continues today, is a huge problem that has decimated a number of tortoise species, leading to local population extirpations, and threatening to drive certain species to extinction. Finally, collection of wild tortoises for the pet trade has had devastating effects on tortoise species, and is rapidly driving several species towards the brink. 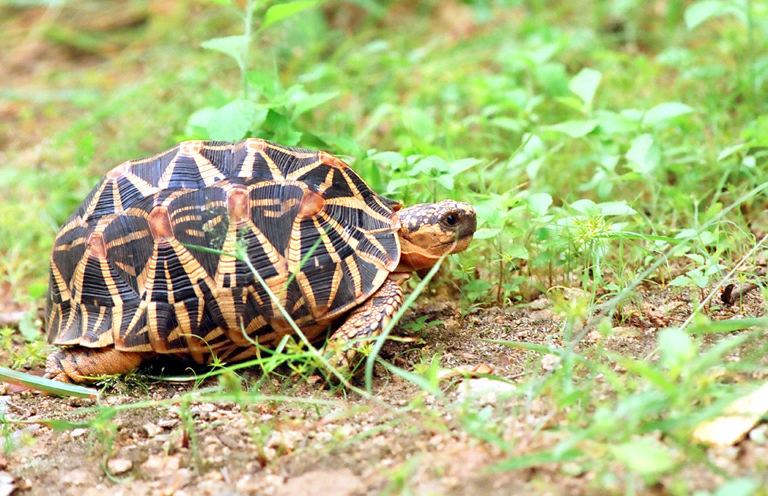 Wild populations of many tortoise species, such as the Indian star tortoise, are under threat of extinction due to exploitation for the pet trade. Photo by N. A. Naseer. 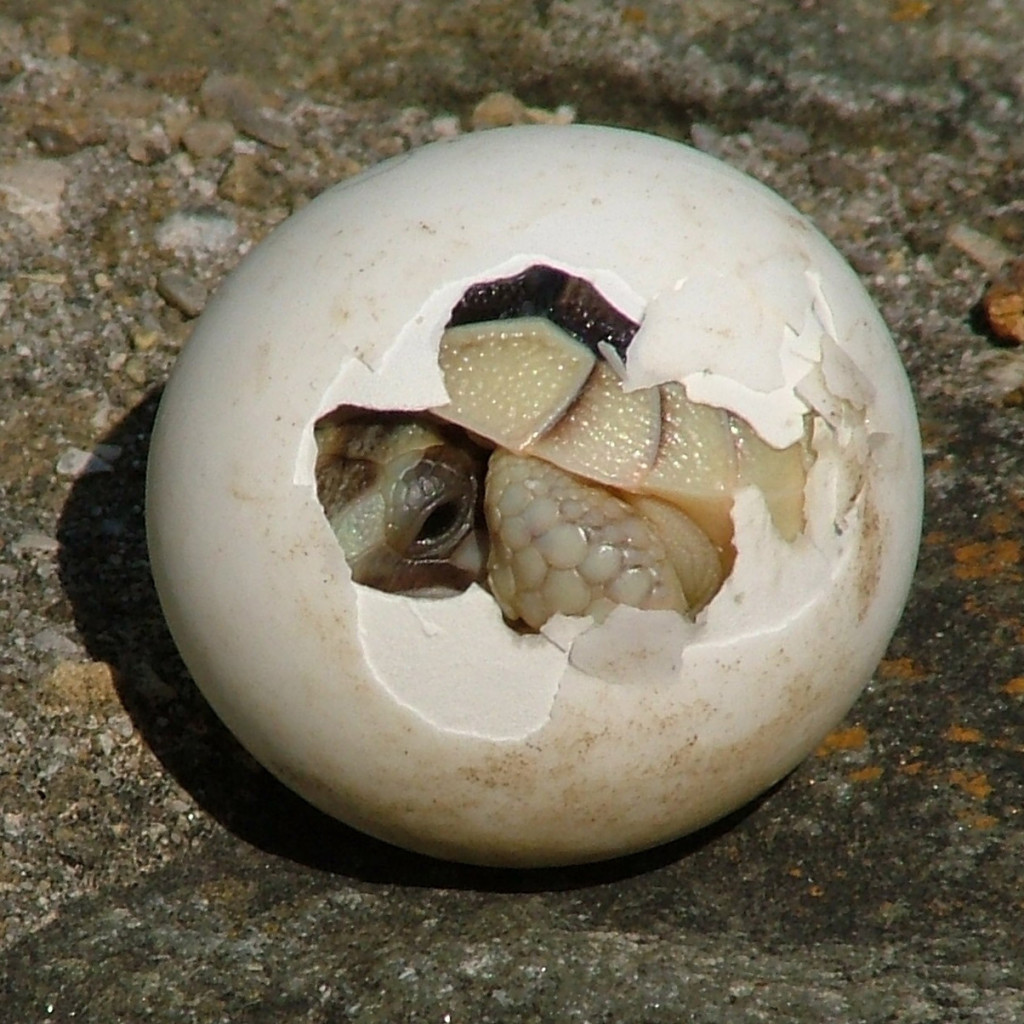 Purchase of captive-bred tortoises ensures that wild populations are not affected by collection for the pet trade. Photo by Richard Mayer.

Andrews, C. W. 1906. A descriptive catalogue of the Tertiary Vertebrata of the Fayum, Egypt. London: Trustees of the British Museum.

Crumly, C. R. 1983. An annotated checklist of the fossil tortoises of China and Mongolia. Proceedings of the Biological Society of Washington 96:567–580.